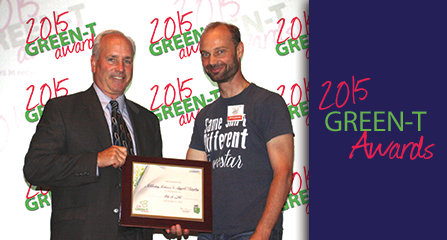 Read original story at cityofjoliet.info, the Shorewood Sentinel, and theherald-news.com

The City of Joliet won top honors from local textile recycler USAgain for municipal leadership with an award for “Outstanding Ordinance to Support Recycling.”

During the 2015 Green-T Award ceremony held at the Shedd Aquarium in Chicago, USAgain recognized the City for its work in making the City’s textile recycling infrastructure more effective. Earlier in the year, the City passed an ordinance that improves recycling efforts by regulating collection boxes through a much-needed permitting process.

“USAgain is proud to present Joliet with “Outstanding Ordinance to Support Recycling” and we applaud the City for adopting this ordinance and creating a process that holds recycling to the highest of standards,” said Mattias Wallander, CEO of USAgain.

Joliet Mayor Bob O’Dekirk said, “Recycling is a foundational component to quality of life and we know that a strong system can contribute to a healthier, more united community.”

The Green-T Awards reward individuals or organizations that support recycling and sustainability in Illinois.  USAgain believes that recognizing the efforts of green leadership encourages environmental stewardship at all levels.