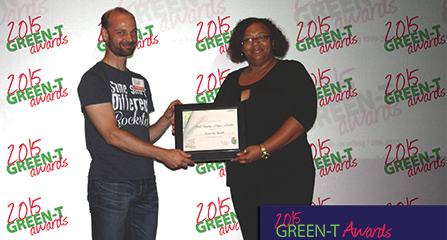 CHICAGO | The Calumet City Thunderbolts won top honors from local clothing recycler USAgain for Best Recycling Program Promotion after turning a one-day clothing drive into a year-long opportunity to further the cause of textile recycling.

During the 2015 Green-T Award ceremony held recently at the Shedd Aquarium in Chicago, USAgain recognized the youth football and cheer organization for its exemplary efforts in reducing textile waste. The Thunderbolts hosted clothing drives that led to the collection of 2,600 pounds of clothing and shoes.

“Football has a huge impact on our culture and there’s a reason that sports figures become role models. It’s been exciting to see the Calumet City Thunderbolt’s passion for good sportsmanship extends beyond the field and into the community,” said USAgain CEO Mattias Wallander. “From the players to the cheerleaders to the parents who greatly championed the issues surrounding textile recycling, we are proud to present the Thunderbolts with a big win for their team and the environment.”

The Green-T Awards reward individuals and organizations that support recycling and sustainability in Illinois. In partnerships with cities, local businesses and nonprofit organizations – including schools, churches, fire stations, humane societies and youth groups – USAgain hosts 1,100 recycling bins in the Chicago area that diverted seven million pounds of textiles from going into landfills in 2014 alone.

"We’re not just a team on game day, and this is a big take away our kids get from our partnership with USAgain," said Lena Smith, the coordinator of the Thunderbolts Booster Club and the fundraiser. "Throughout the season, we’re learning about healthy habits, good examples and winning skills. Textile recycling gives us the opportunity to apply these lessons off the field and understand the impact we have on our communities.”

USAgain has corporate headquarters in suburban West Chicago. Its mission is to provide consumers with a convenient and eco-friendly option to recycle excess clothing. The USEPA estimates that the average person throws away 70 pounds of clothing per year, totaling an estimated 12 million tons in landfills.