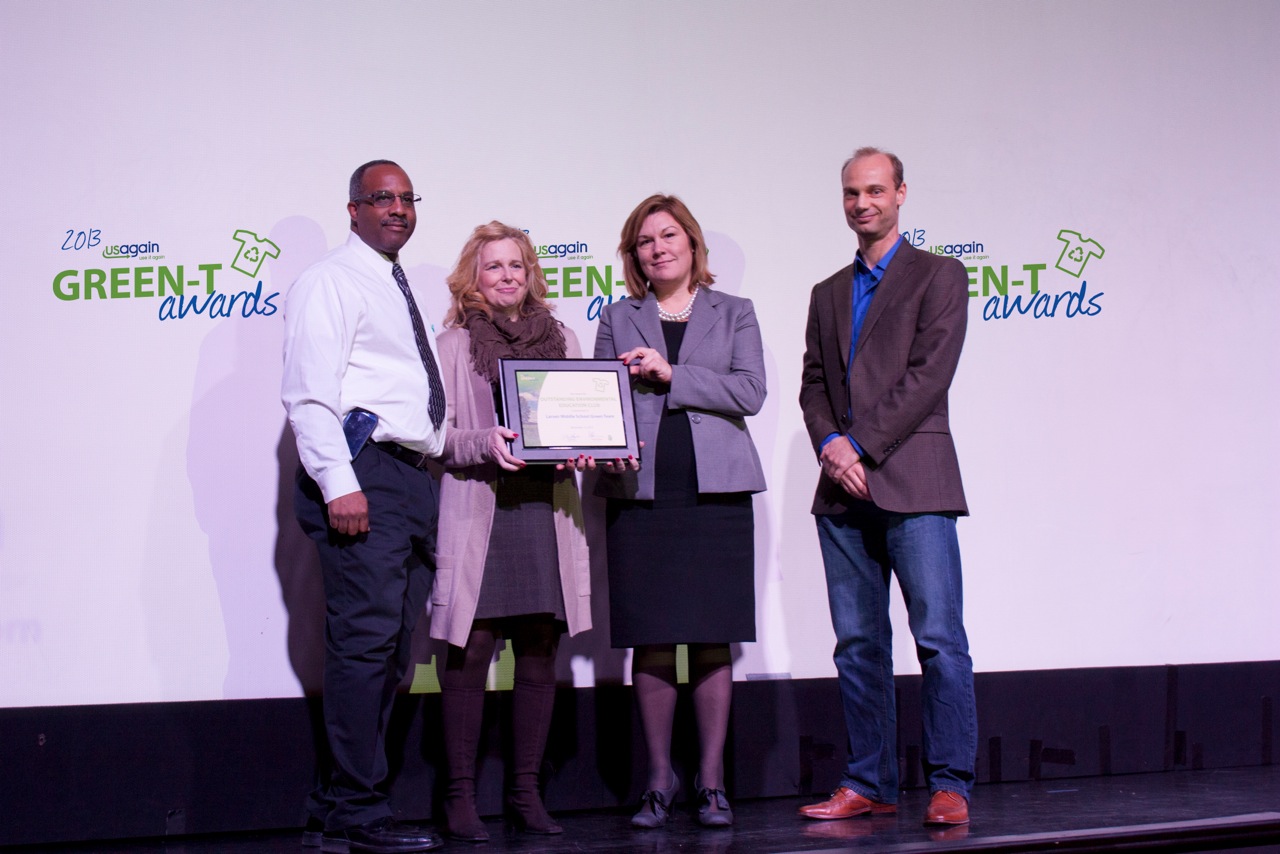 WEST CHICAGO, IL (November 13, 2013) - USAgain, the textile recycling company based in West Chicago, IL, has announced the winners of its inaugural Green-T Awards. Among them are two Elgin middle schools: Abbott Middle School, a recipient of the award for Excellence in Green Fundraising and the Larsen Middle School Green Team, recipient of the award for Outstanding Environmental Education Club.

The Green-T awards seek to recognize and positively reinforce individuals and organizations that support recycling and sustainability in Illinois.

Abbott Middle School recycled a total of 39,694 pounds of clothing and textiles in 2012, a truly impressive amount worthy of recognition. In addition to diverting a significant amount of clothing from landfills, Abbott also won first prize in USAgain’s Earth Month Challenge, a recycling drive featuring nearly 600 schools across the country. In total, Abbott has raised $3,361 in partnership with USAgain.

By recycling 39,694 pounds of textiles, Abbott saved over 277,000 pounds of CO2 from entering the atmosphere; they also saved over 55 million gallons of water through their commitment to recycling. Abbott serves as a role model for other schools in Illinois and across the country, and USAgain looks forward to a future of recycling with the school, students and community of Elgin.

“We love working with schools and spreading the message of textile recycling to teachers and students,” said Mattias Wallander, CEO of USAgain. “Abbott Middle School heeded the call of recycling and collected an incredible amount of clothing for reuse and recycling in 2012. We applaud and appreciate their efforts toward a greener community.”

Meanwhile, Larsen’s Green Team has done an outstanding job educating students on the importance of sustainability and preserving the environment. The Team has worked to spread green initiatives throughout the school by creating classroom displays and weekly announcements to help the school as a whole become more sustainable.

“Each year I am excited to continue with our program,” said Trish Molley, science teacher and GREEN Team coordinator for Larsen Middle School. “I am able to witness the numerous facets of growth in a student as time passes by each Thursday. As a teacher, what more could I say—priceless!”

Students in the GREEN Team are a devoted and ambitious group of 7th and 8th graders. The group meets every Thursday after school. The GREEN Team works to maintain their student-designed website at www.greenlancers.webs.com. The team also runs contests for the school and community and works with public officials on making Larsen a more sustainable school. They also produce green-minded video commercials to be show throughout the school

In addition to the Green Team, Larsen also hosts a USAgain bin. In 2012, they collected 9,128 pounds of clothing for reuse and recycling. By doing so, the school saved 63,896 pounds of CO2 and over 12 million gallons of water. USAgain looks forward to future work toward recycling and sustainability with Larsen’s Green Team.

“The Larsen Green Team is a great student-teacher organization,” said Wallander. “We’re pleased to be able to work with them, and we think every school follow Larsen’s lead and adopt similar green initiatives.”

Other recipients of USAgain’s Green-T Awards include Will County Forest Preserve District and Northwestern Memorial Hospital. For a full list of award recipients, visit http://www.usagaingreentawards.com/winners.