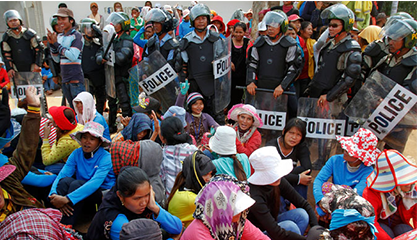 This month, in response to union requests, Cambodia's government is scheduling more talks to address garment workers' demands for a pay increase to $177 a month. Low pay and horrible working conditions are a worldwide problem for garment workers. The workers are the only variable in the textile supply chain that can be manipulated by clothing brands for increased profit at the cost of human worth.

In 2014, Cambodia's government security forces killed five when they attacked garment workers while they were protesting low pay. It is one in a string of tragedies worldwide that have hit garment workers hard. The broken fashion supply chain system makes trillions in revenue for major brands while paying the workers pennies, with some making as little as $3 per day. Others work long hours in poor conditions.

In 2012, the Ali Enterprises factory in Pakistan burned and the flames engulfed workers, killing close to 300. Also, in 2012, a fire at Tazreen Fashion factory in Dhaka, Bangladesh, which at the time was making clothes for major brands like Sears and Walmart, killed 112 employees. In 2013, a building (Rana Plaza) collapsed in Bangladesh, killing 1,134 people.

According to a new documentary that premiered in May, called The True Cost, the rising cost of textile manufacturing is human dignity and human life. They are not measured in profit and loss statements, but the losses are devastating on many levels. According to the documentary's director Andrew Morgan, business practices in the textile industry have become a moral issue. The documentary highlights the plight of garment workers, and the dilemma of factory owners who can lose business if they do not concede to the low-ball demands of the powerful fashion brands.

Labor intensive industries, like fashion, are more sensitive to the costs of labor. The United States is the largest importer of textiles from developing countries. At one point, lack of capital and economic opportunity in developing countries meant that workers could be paid a low wage by U.S. standards and still be content. However, the race between brands to compete for the lowest costs has driven garment worker wages to the floor, according to Morgan.

Value added per hour of production worker output increases labor productivity, and decreases the output price per item. The value to fashion brands is that the price of the product is also lowered. This is why consumers can purchase clothing items for less than $10 in some stores. The documentary introduces a scenario whereby a brand will submit a bulk order, requesting 1.5 million garments at a price of .30 each. The garment may be priced in the range of $20 to the end buyer. This leads to extensive profits for the fashion industry, but unsafe conditions and low pay for workers.

Cambodia's garment industry employs 600,000 workers. Voice of America's Hul Reaksmey reported that the textile industry is a leading stimulus for Cambodia's economy. The same is true for many developing countries. In Turkey, the textile sector is the biggest sector contributing to the country's economy, representing more than 10 percent of the country's gross GDP annually. The Indian textile industry is the second largest, after China. It has a 23 percent share of the world's spindle capacity. Vietnam is the 5th largest textile exporter in the world. Vietnam's textile industry is aiming to increase total exports to $28.5 billion in 2015.

Like many developing countries, Cambodia must balance the interests of its garment labor force, against the powerful fashion brands who can easily switch manufacturing to a different country. According to Reaksmey, the Ministry of Labor is requesting documentation from all stakeholders to measure productivity costs against market competitiveness.

As consumers, we must use a different measuring stick in Cambodia, and around the world. The excessive profits of the powerful fashion moguls should not outweigh the cost of lives, and the human right for garment workers to make a fair living wage.