MAYOR CLINTON I. YOUNG, JR. AND USAGAIN CORPORATION PROMOTE RECYCLING AND THE REUSE OF CLOTHES, SHOES AND TEXTILES THROUGHOUT THE CITY OF MOUNT VERNON

Mount Vernon, NY - Mayor Clinton I. Young, Jr. announced today that the Department of Recreation and USAgain Corporation began a new recycling initiative in the City of Mount Vernon that will boost the City's carbon footprint while earning revenue. The announcement was made during a news conference at Brush Park on August 9, 2011. USAgain Corporation is a Mount Vernon based commercial enterprise that promotes recycling and the responsible reuse of clothes, shoes and textiles. The company is dedicated to helping the environment by conserving natural resources and greenhouse gases.

Under the initiative, USAgain Corp. recycling containers have been placed at convenient locations such as Doles Community Center located on 250 South 6th Avenue; Brush Park parking lot located at 3rd Avenue between 6th Street; Hutchinson Field parking lot located at 659 Garden Avenue. The city will be compensated for the additional poundage.

"I commend Recreation Commissioner Peter, Deputy Commissioner Rasul Salahuddin and USAgain for developing this initiative to promote recycling in our city. We are proud to say that Mount Vernon is going green. Now there's more of an incentive for residents to utilize these containers, which will be a tremendous benefit the city environmentally and financially," stated Mayor Clinton I. Young, Jr.

"It is very simple; we customize an ongoing clothing, shoe and household textile recycling program that directly benefits the City of Mount Vernon. We accomplish this by working with you to strategically locate and place textile recyclers at specific community locations, and then we compensate the city quarterly on a poundage performance basis", stated Ted Fisher, Regional Recycling Manager for USAgain Corp.

"We are looking forward to working with USAgain Corporation and all the benefits that come along with recycling. Not only will this new venture reduce waste, it will save the City of Mount Vernon money by reducing the cities carbon footprint, which in turn will create a new revenue stream for the city," stated Commissioner Peter J. Neglia of the Mount Vernon Department of Recreation. 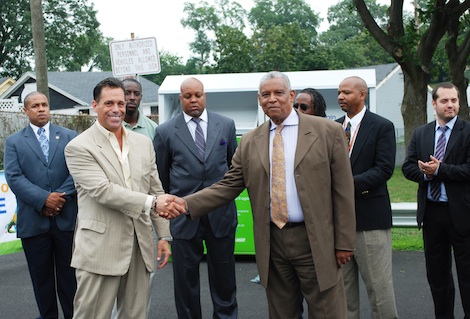