After she and her classmates gathered 2,445 pounds of used clothing in one month to be recycled, St. Christina School sixth-grader Brooke Yurisich said the achievement “means a lot to me.”

“I really like to save our environment and keep the Earth clean. It’s amazing. Kids just drop these clothes off when they get too big for them,” Brooke, 12, said Wednesday.

“I have a compost pile at home. We have a recycling truck that comes around on Mondays. We recycle newspapers, aluminum, anything, really,” she said.

St. Christina placed third of 540 schools nationally and won $500 from USAgain, a for-profit textile recycler based in West Chicago. The check was presented Wednesday during a special service for grandparents in the St. Christina church.

Illinois schoolkids must enjoy recycling, as the top three schools are in the state. Abbott Middle School in Elgin was first with 3,104 pounds and won $1,000. Second with 2,616 pounds and $750 in prize money is downstate Byron School District 226, according to a USAgain news release.

“The program increased awareness. We would hear, ‘Great, I have tons of clothing I can bring in.’ We had it in the parish bulletin. We put out fliers. People were very supportive. We’ll put the prize money in our school technology account. It’s a win-win for everybody,” Stokes said.

Ald. Matt O’Shea (19th) said in a news release that he’s “very proud of our local students. Programs like this help educate the young members of our community about how to take better care of our planet. That kind of knowledge is precisely the foundation we hope to build for our community’s future.”

The 540 schools collected a combined 188,650 pounds of textiles, or the equivalent of 43 full garbage trucks, according to a news release.

“That’s a great accomplishment, especially their first month. Normally, it takes three or four months or a new bin (to generate that much),” McCreight said.

Most of the clothing collected by USAgain is sold to thrift stores “and gets used again,” he said. A portion is turned into rags or insulation, he said.

Clothing drive contests are held for schools in April and November, he said. 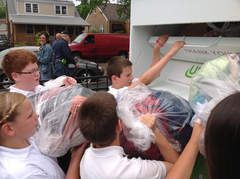