USAgain teams with Forest Preserve District of Will County

The Forest Preserve District of Will County has teamed with USAgain (pronounced "use again") to provide 21 textile recycling bins at 18 preserves around the county. USAgain collects used clothes and resells them worldwide to conserve natural resources.

In July 2011, our Board of Commissioners approved a one-year contract with the company to install the bins at preserves identified by District staff. Each collection bin holds up to 500 pounds of clothes, shoes, and household textiles. USAgain will service each bin once per week, or more so if demand requires. The Forest Preserve will receive two cents per pound of all textiles collected from the bins.

The map below shows all of the USAgain collection bin locations. Download a printable version of this map. (To view a Google Map and obtain customized driving directions for a specific preserve, click the preserve name above then click the "Map It!" link in the right pane of the preserve's page.) 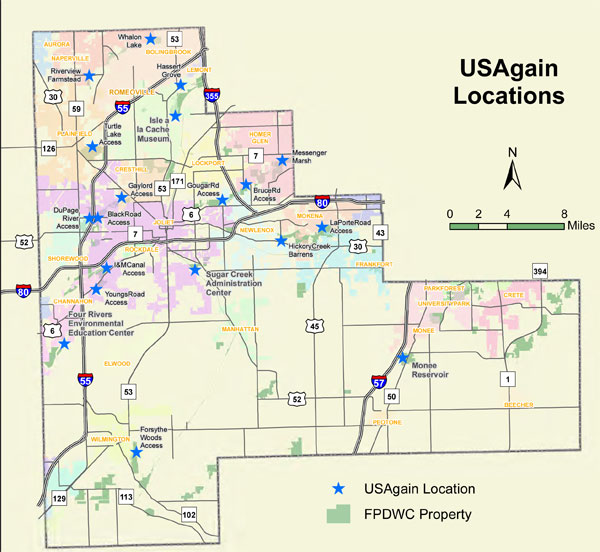 Each year in the United States, every man, woman, and child purchases more than 81 pounds of textiles. This includes 66 pounds of clothes, footwear, towels, sheets, and pillowcases, of which only about 10 pounds will ever be reused or recycled. The remaining 56 pounds of textiles will end up in landfills as trash.

USAgain, whose corporate office is in West Chicago, Illinois, is a green, for-profit textile recycling company that employs 220 full-time workers.

USAgain collects about one million pounds of clothing per week, which is then purchased by wholesale buyers, thrift store chains, and textile recyclers. With more than 10,000 collection bins in 15 states, USAgain retrieved 56 million pounds of discarded clothing in 2010, preventing 392 million pounds of carbon emissions and saving 320,000 cubic yards of landfill space.

From 1980 to 2005, the worldwide textile trade grew 10 times, from $200 million to $2 billion in revenues. The top exporters of textiles are the United States, Germany, United Kingdom, and the Netherlands, and the top importers are Sub-Saharan Africa, Southeast Asia and Eastern Europe.

According to USAgain, textiles account for more greenhouse gas savings than paper, plastics, and glass combined. For every ton of textiles that are recycled, seven tons of carbon dioxide are saved from the production of raw materials and manufacture of textiles.

The company Web site announces that "gently used clothes" can be recycled. But USAgain also accepts those textiles that are torn, stained, or threadbare to sell to recyclers that shred the items to make insulation for dishwashers, housing, the automobile industry, and mattress padding. Non-reusable shoes are ground up to make raw materials for sidewalks, running tracks, playground mulch, and carpet padding. Only five percent of collected items are deemed unusable and discarded.

"We are thrilled to partner with the Forest Preserve District of Will County. Their commitment to preserving and protecting the county's natural heritage dovetails with USAgain's commitment to environmental sustainability," said USAgain CEO Mattias Wallander.

"The Forest Preserve District of Will County is committed to conservation, and adding textile recycling, especially with collection bins placed at preserves all around the county to make it convenient for residents to recycle, enhances this ethic in a very positive way," said Cory Singer, president of the Forest Preserve Board of Commissioners.