Read the original story on MySuburbanLife.com

WEST CHICAGO – After spending several years working with nonprofits in Central America and Africa, Mattias Wallander saw the need for clothes and other textiles there.

He also knew about the amount of clothing waste in the U.S. and the lack of initiative being taken to address it.

Together with his wife, he founded USAgain, a for-profit recycling company that collects unwanted textiles and distributes them for resale in marketplaces and thrift stores across the globe.

“We could see the need for finding a solution to keep the material out of landfills here, and, at the same time, the need to reuse that material in less-developed countries,” Wallander said.

USAgain started in Seattle in 1999, before expanding to Chicago and Atlanta in 2000. It now has locations throughout the U.S. The Chicago division’s branch is based in West Chicago. The company has more than 1,400 collection bins throughout the Chicago region.

USAgain accepts clothes, shoes, accessories and household textiles such as towels, sheets and curtains. Damaged items may be recycled, as long as they’re able to be repaired, which actually can create jobs in the countries where some items are shipped, Wallander said. If something is moldy or soiled with oil, however, it cannot be reused.

Once textiles are donated to USAgain, they are weighed, sorted and packed. They then are sold for cents on the pound to thrift stores or other sellers. About half of the textiles go overseas, and many items are sold by local entrepreneurs in marketplaces in Central America, Wallander said.

USAgain has collection bins in communities near West Chicago, including Wheaton.

The city of Wheaton adopted a series of regulations for collection bins in 2010 after holding several public hearings, said Tracy Jones, a staff planner with the city.

Besides the USAgain bins, there also are an assortment of other bins in the city for charities and for-profit companies, Jones said.

There is no permit process in place, but bin owners must comply with zoning ordinance regulations that define the appropriate size and location of bins. The regulations also state that the name and phone number of the bin owner must be posted.

Depending on how much typically is donated at a USAgain bin, textiles may be picked up daily, once a week or once every two weeks. Currently, about 200,000 pounds are collected each week from bins in the Chicago region, Wallander said.

Although the amount of textiles that are recycled has increased over the years, this is because people are consuming more than in the past, he said. Overall, the percentage of textiles that end up being recovered has stayed about the same.

According to the Environmental Protection Agency, this was about 15 percent in 2010.

Wallander said there are benefits to recycling textiles, from job creation to environmental relief to support for poorer communities across the globe.

“We’re competing with the trash can,” Wallander said. “We’d like to see more people making the choice to reuse instead of trashing.” 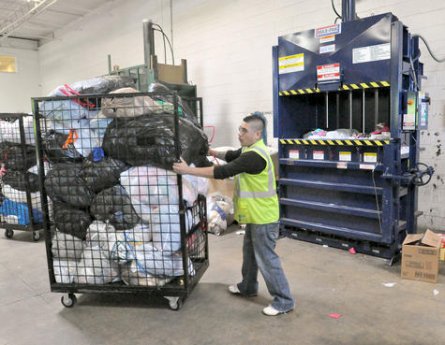